The Kormantse people claim that they came along with seventy-seven (77) deities. Kormantse people continue to celebrate their Brong Ahafo heritage with the modern Techiman (Takyiman) traditional area in an annual festival held in Kormantse. The seventy seven deities of Kormantse are said to have resulted from adopting additional powerful deities at every point in their journey to Kormantse and they have since remained there. The principal communal gods are, therefore, believed to be as old as historic Kormantse. For instance, Tigard is a widely known anti-witchcraft cult in Ghana and this was imported from northern Ghana to other communities across the country to fight the practice of witchcraft in the community. The people of historic Kormantse No. 2 added to their gods when they realized that children were dying yet they did not have the antidote to forestall the rate of infant deaths. They went to northern Ghana to acquire the anti- witchcraft cult called Gyewur. Significantly, when Gyewur was installed at Kormantse Nkum, the tide of deaths are said to have reversed such that the old people started dying while the younger ones survived. It is also very instructive to note that the elders of Kormantse Bentsir also brought Tigaare to their community for the purposes of healing the sick but more significantly for catching witches. Some of the more popular deities identified at Historic Kormantse today include: (Photos: Copyright KARP) 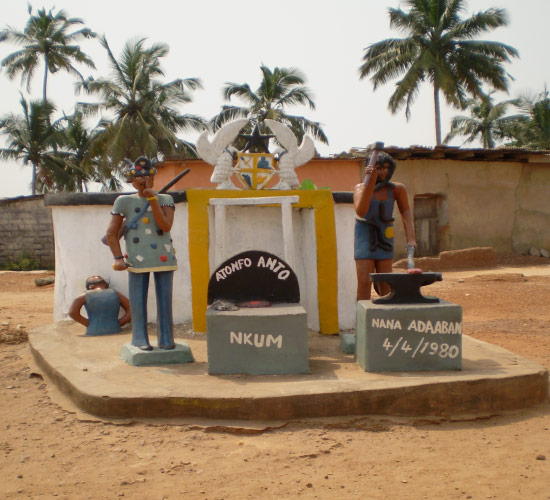 The community shrine, posuban, of Kormantse Nkum depicting the abode of Nana Adaaban as an iron monger at his forge, a mud furnace and an admonishing Supi Amiansah. The busts of two men about to be beheaded in the background are ‘believed’ to be the reconstruction of punishment of two captive enemies. At the masthead is the coat of arms of Ghana, a more recent addition. The relevance of such shrines, dotted along coastal Fante and further inland is underscored by the Fanti aphorism which states that: a town without a pusuban is no town. The saying means that a town without a pusuban never engaged in warfare and consequently has no history. 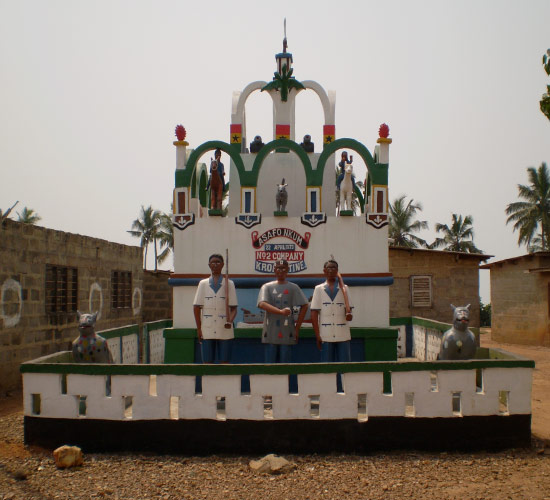 This is a picture of the Kormantse Nkum asafo pusuban rebuilt as recently as 1973. It has a multiplicity of proverbial statues, symbolic motifs and representations. Supi Samanpa and the two asafo company members depict the military antecedents of the pusuban. The outfit of the horse riders is a manifestation of the discipline of the Kormantse Nkum asafo company, but this sits atop the Ghanaian proverb that “if the horse is mad, its jockey is not mad.” This is in obvious remonstration with known adversaries of the Kormantse Nkum people. The Nkum pusuban is a fortress guarded by two leopards-twi, two cannons and the naval vessel MV Kormantse. This ship alludes to slave trade and the role of Kormantse in the trade. 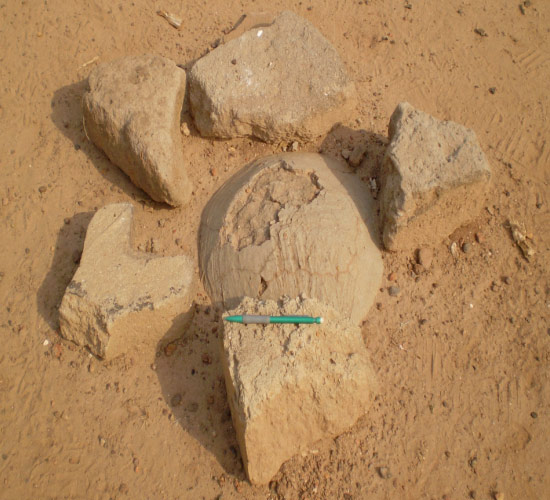 This shrine is known simply as Esiwdo and it belonged to the community of Kormantse. It was used as a place where a new Safohene went to swear the oath of allegiance to the entire community. Water was applied to the clay coating and used to mark the upper arm of the one being initiated. Also, when by-laws are passed to govern the community, they were ratified at Esiwdo and thereby made enforceable. 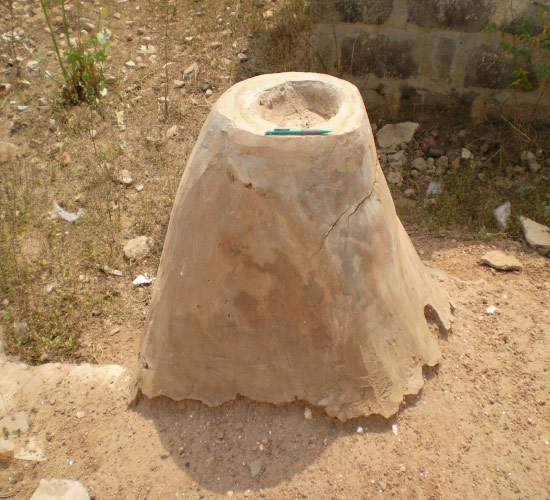 Abusua akor or altar which belongs to the Ekona abusua of Kormantse. It is also known as akongwa dan because it represents the akona abusua stool in this community. The altar is meant to guard the members of the clan. Individual clan members can pour water or alcohol in the receptacle and solicit blessings from the clan deity. 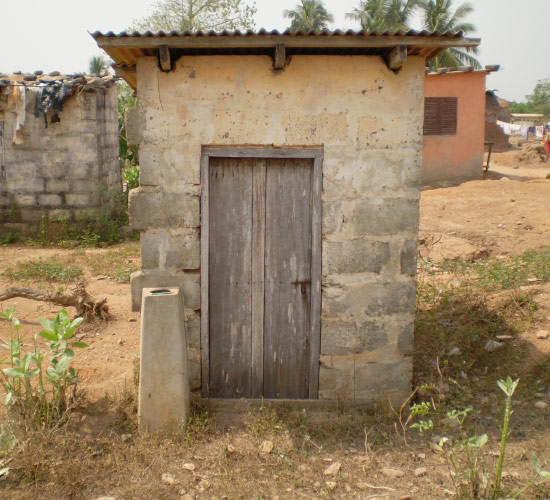 Nkyen dan or store room for Bentsir asafo drums and believed to be governed by Nana Amissah the principal deity of Bentsir Asafo. Drums used for war are kept here and before they are moved out, blessings were sought from Nana Amissah who was believed to assist the paramilitary force on their expeditions in other jurisdictions. 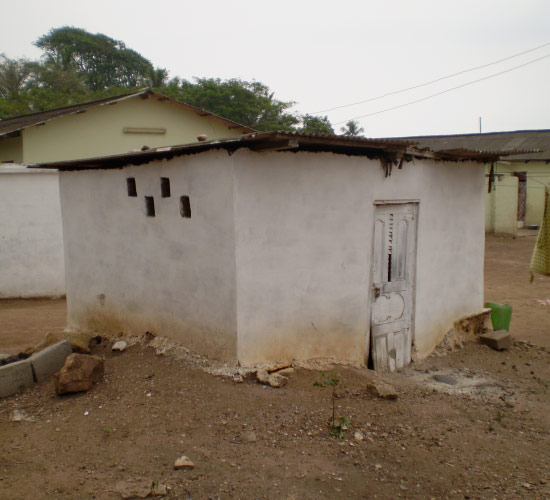 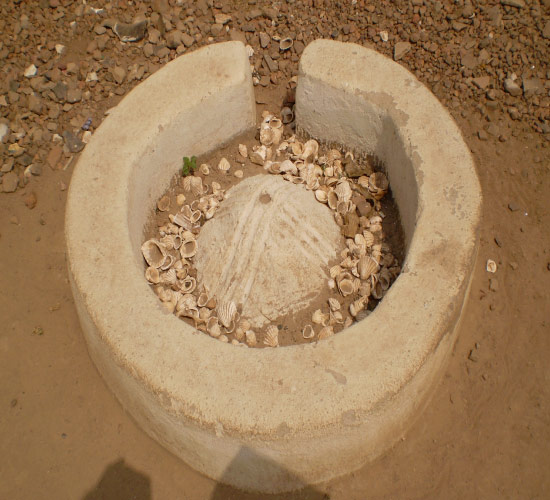 This is Safohene siw shrine, a place where Nana Eguasaman of Kormantse Nkum swore her oath to assume duty as Safohene of the Nkum paramilitary force. The siw was built in 2008 in honor of their illustrious female Safohene who lived to a ripe old age. At the end of the year when the asafo embarks on a procession through the town, they end up at the siw, pour libation and use mud to make marks on the upper lower arm of the successor. 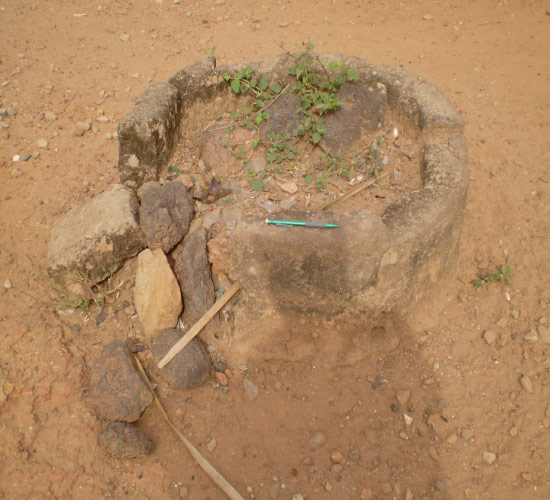 Nana Ebufi deity belonging to the Twidan abusua (Clan). It exists to protect members of the clan. 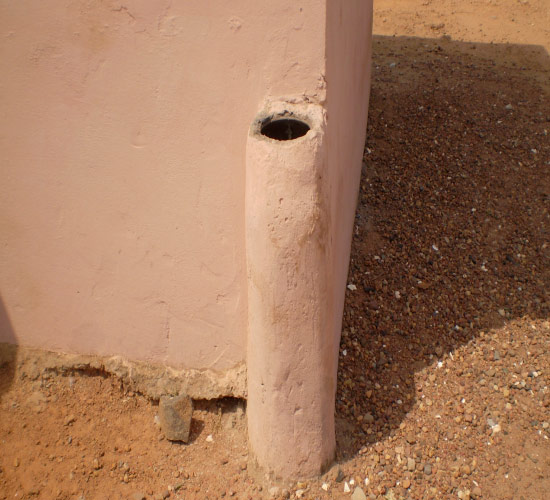 Egona abusua akor or altar. It is a place for pouring libation to the spirit ancestors of the Egona abusua. 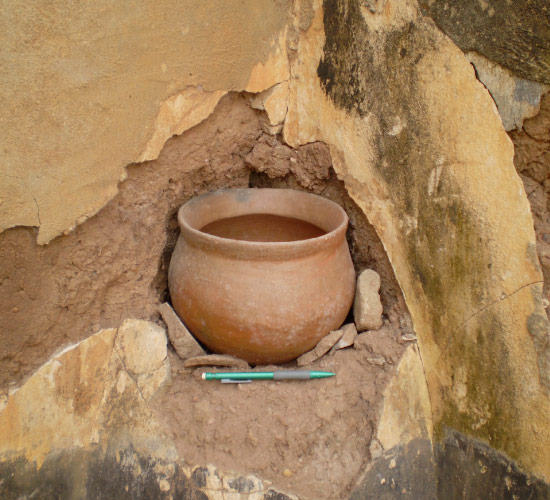 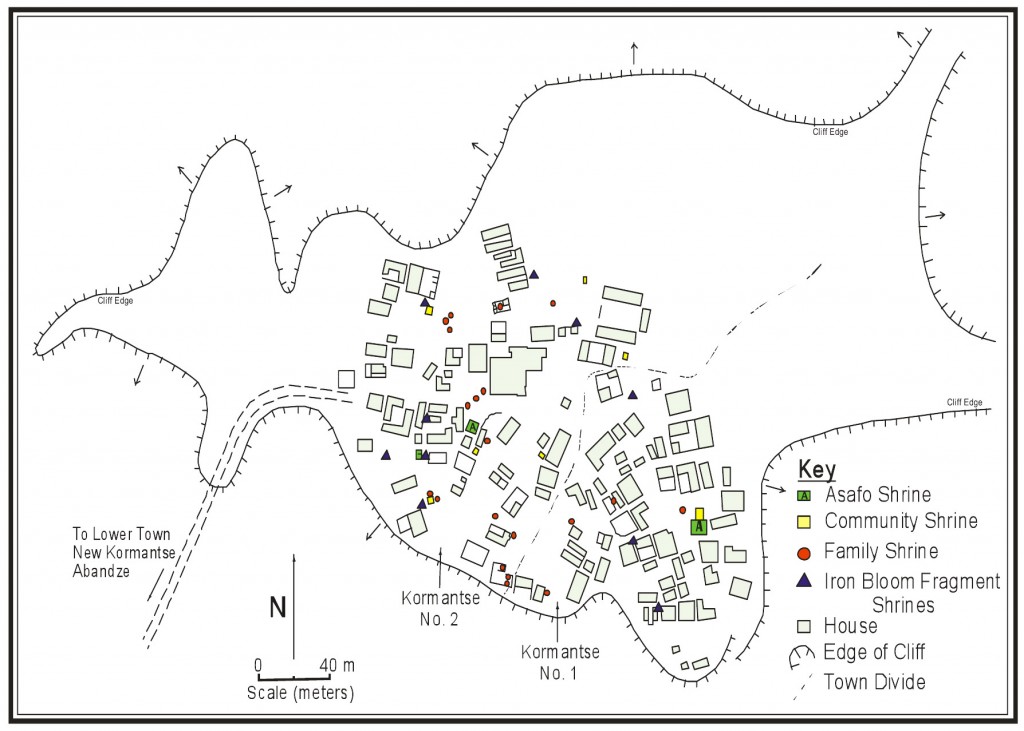